The Trump administration on Wednesday released a broad outline of a plan to make major changes to the tax code. Many important details were left for Congress to hash out, including how to pay for the tax cuts and which deductions to eliminate. Some key elements of the proposal: 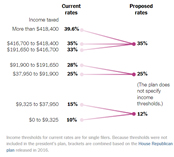 The plan would reduce the current marginal individual income tax brackets to three from seven — 12, 25 and 35 percent, and leave open the option for a fourth, higher rate.The plan does not specify which income levels would be taxed at each rate, but if the highest rate is set at 35 percent, it would greatly benefit the wealthiest taxpayers, who currently pay a top rate of 39.6 percent on income greater than $418,400 for single filers.

While the rate applied to the lowest income bracket would increase, the plan says that typical families in the existing 10 percent bracket would be better off because of a larger child tax credit and an increase in the standard deduction. The full effects of the plan on different groups has not yet been analyzed by experts.

The plan would also eliminate the alternative minimum tax, which has critics on the left and the right, and the estate tax on inherited wealth greater than $5.49 million, a longtime Republican target.

The plan would nearly double the amount of the standard deduction and eliminate the personal exemption, a deduction based on the number of taxpayers and the dependents claimed on a return. The new, single deduction would be higher for many filers, except those who claim multiple children (it’s possible that a higher child tax credit could make up for the disparity). 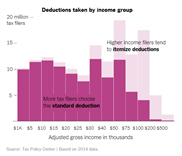 According to an analysis of an earlier House Republican tax plan by the Tax Policy Center, 84 percent of filers who currently itemize their deductions would take the standard deduction if it were doubled.

To help pay for the increase, the plan would eliminate other deductions, with the exception of the mortgage interest and charitable contribution deductions. 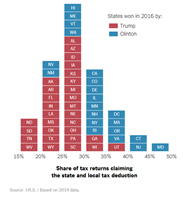 The biggest deduction that would be eliminated is the one for state and local taxes. That deduction primarily helps people in blue states where taxes, and often incomes, are higher.

But the political divide is not so straight-forward. A recent Tax Policy Center analysis found that of the 20 congressional districts with the highest percentage of returns claiming the deduction, nine have Republican representatives.

>The plan would create a new 25 percent tax rate for “pass-through” businesses — sole proprietorships, partnerships and S corporations that currently pay taxes at the individual rate of their owners. Pass-throughs now make up about 95 percent of businesses in the country and the bulk of corporate tax revenue for the government.

Most pass-throughs are small sole proprietorships currently paying less than a 25 percent marginal rate. But a few are quite large — 1.7 percent of pass-through businesses generate more than 40 percent of all pass-through income and are taxed at the top 39.6 percent rate. The plan would be a windfall for these high-earning pass-throughs

The plan will rely on congressional committees to adopt measures to prevent wealthy individuals from incorporating as pass-through companies to pay a lower tax rate on their income.

Lower the Corporate Rate While Eliminating Some Tax Breaks

The plan would lower the corporate tax rate to 20 percent from 35 percent and eliminate some business deductions and credits. The proposal says that the deduction for domestic production would no longer be necessary because of low rates, and it “envisions repeal of other business credits,” with the exception of those for research and development and low-income housing.

A recent analysis by the Tax Foundation found that eliminating all corporate tax expenditures that do not change the structure of the tax code would pay to lower the rate to 28.5 percent from 35 percent, far short of the 20 percent rate called for in the plan. Because the Trump plan calls for retaining some expenditures, Congress will have to find even more savings to pay for the tax cut. 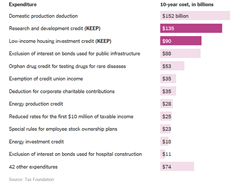 The plan also makes several other major changes to the corporate tax code, including allowing immediate expensing of assets for at least five years, scaling back deductibility for corporate interest expenses, moving to a territorial system and implementing a one-time repatriation tax on profits overseas.