The Tax Administration in Spain went from 3,486 penalties to taxpayers for late declaration of the modelo 720 in 2015 to 0 so far in 2019: These are the formal ‘automatic’ sanctions for late statements, of 100 euros for undeclared data, with a minimum of 1,500 per group of assets, even if they are cashless accounts; Inspection (which, as the name implies, goes ‘more thoroughly’ and sanctions not only delays but concealment of assets with fines of 45% in the IRPF of the undeclared, 150% of the previous fee and 5,000 euros for undeclared data) also lowered its figures, from 835 fines in 2015 to 6 this year.

The Treasury has ‘loosened’ the number of penalties that it places on taxpayers for delays or omissions in relation to the declaration of assets abroad (model 720), as can be seen from the breakdown of fines for this concept. At the end of 2015, the European Commission initiated the disciplinary proceedings against Spain for understanding that all these fines were “disproportionate and discriminatory.” The file ended with a reasoned opinion in February 2017 that required our country to soften the system because it considered it contrary to community law. Spain’s non-response led the Brussels-based body to announce last June its intention to activate the legal route with a lawsuit before the European Court of Justice. It will foreseeably materialize next September and could have not only an impact on the litigation on the fines but, once resolved, possible retroactive effects on all the sanctions imposed that could result in claims of patrimonial responsibilities against the State. 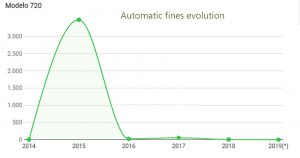 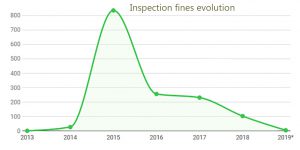 In line with the ‘pressure’ of Brussels, in any case, the fines of the Tax Administration fell to just 25 in 2016, had a slight rebound until 55 in 2017 but fell again, to 7, in 2018, and in 2019 they seem having literally stopped: not a penalty, not even an open file, between January 1 and July 15 of this year. A similar path has followed, although somewhat more gradually, the sanctions of the Inspection Department, which dropped from 257 in 2016 to six so far in 2019. From the Ministry of Finance, until now, they have not given an explanation for such a decline, beyond clarifying that no measures of any kind can be taken at this time for being “in operation” and that, although the volume of the outcrop since 2013 it exceeds 156,000 million, they cannot report on the amount of the sanctions. “It is also clear that what we perceived was true. There are still many people who are not encouraged to submit this statement and / or who submit it late, but it is seen that the Tax administration has begun to keep the weapon under pressure from Europe, and the Formal lawsuit in Luxembourg can already be lethal, “says lawyer Alejandro del Campo, promoter of many appeals against fines and initial complainant of the system in Brussels. “The null number of management fines this year makes it clear that officials were told to stop giving the little button on automatic sanctions. The reduction in the number of inspections is also very significant and important,” says Del Campo. “It is shown that they go more in sniper plan and looking for pieces of big game; you have to be less afraid to submit the statement.”